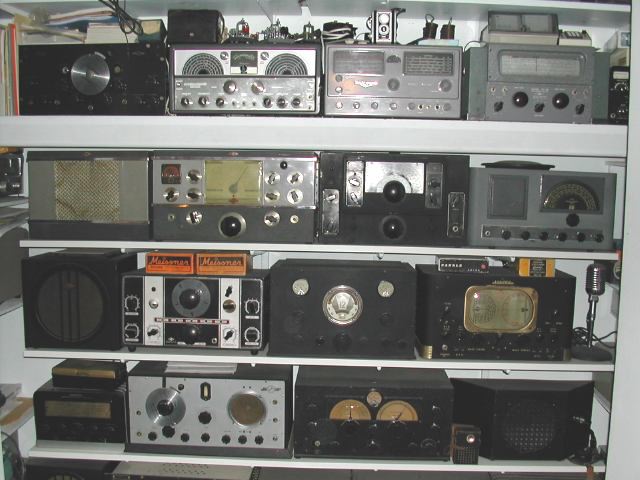 Starting at the top from left to right

Bottom row which is not visible in photo 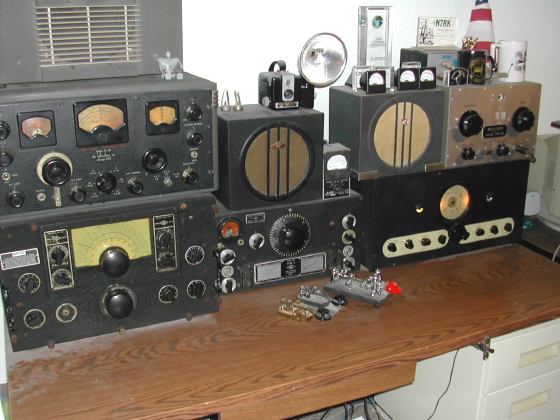 I use the Meissner Signal Shifter with it's 8 watts out as my transmitter and I can switch between the following receivers: Hallicrafters SX-28 and PM-23 speaker, National RAO-7, National HRO-5T and factory speaker and RCA ACR-175 from 1936. The three keys are: a 1940's Vibroplex bug, my original E.F. Johnson straight key that I got as a novice in 1963, and a brass Signal Electric key. I have always preferred straight keys with skirts as I find them more comfortable to send with.

The HRO-5T is special to me. It belonged to my Elmer, W6BAM and I used to use it at his station back in the early 1960's when I was a kid (ages 11-14). Even though I had a top of the line Hallicrafters SX-115, I thought it was a really neat receiver. He had bought it new when he came back from WWII and used it up into the late 1980's. He sold it to me in 1995 and I brought it back to Phoenix from northern California on the airplane in my carryon! I stopped at a packing store and had them pack the coils, speaker and power supply which were than checked as baggage. I threw my expensive 3 piece suit, tie and shirt into a paper shopping bag and carried it on the plane also. Although it looks stock, he added a voltage regulator circuit to the oscillator which results in it being a much more stable and usable receiver. He also modified a couple of the plug-in coils so that I have a 15 meter bandspread coil and a 160 meter bandspread coil which was made from a broadcast band coil.

Photographs and text can be reproduced provided that they are credited to David S. Hollander.